About the Russian River Estuary

The Russian River Estuary closes throughout the year as a result of a sandbar forming at the mouth of the Russian River. The sandbar usually closes during the spring, summer, and fall when river flows are relatively low and long period waves transport sand landward, rebuilding the beach that was removed by winter waves and river outflows. Closures result in ponding of the Russian River behind the sandbar and water level increases in the Estuary. Natural breaching events occur when estuary water surface levels exceed the sandbar height and overtop the sandbar, scouring an outlet channel. Public agencies have been involved in breaching the sandbar since at least the 1960s. Sonoma Water became responsible for breaching activities in 1994.

Sign up to receive E-Mail notifications when the estuary opens or closes.

The eleventh annual Russian River Estuary Management Project Community Meeting will be held on Wednesday, August 28, 2019 from 6-7:30 p.m. at the Jenner Community Center. The meeting will consist of a presentation on the Russian River Estuary Management Project, which will include information about the annual outlet channel management plan, and updates on the estuary water quality monitoring and fisheries monitoring programs. There will be a question and answer session following the presentations.

View agendas and presentation of past Estuary Community Meetings

Beginning in the early 1930s, a series of private companies built a jetty at the mouth of the Russian River with the goal of keeping the river mouth open to allow shipping. Over the next two decades, material was added to the jetty but the effort was abandoned when the jetty failed to keep the river mouth open. Today, most of the jetty is buried under sand.  The Russian River Biological Opinion requires Sonoma Water to study the jetty to learn if and how it impacts the formation of the sand bar (known as a “barrier beach”) at the mouth of the Russian River estuary and the impact of the jetty on water levels in the estuary. 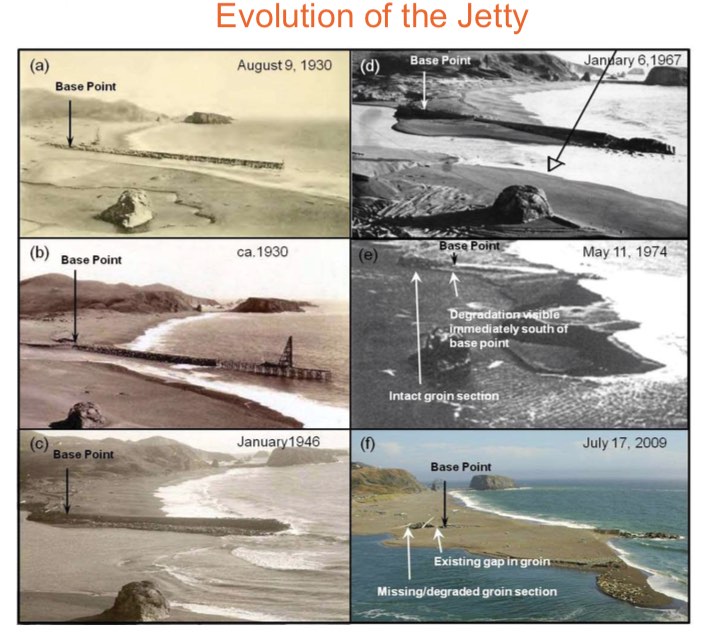 Evolution of the Jetty at Russian River Estuary

Sonoma Water is mandated under an Endangered Species Act (ESA) Russian River Biological Opinion issued by the National Marine Fisheries Service, and a California ESA Consistency Determination issued by the California Department of Fish and Game, to adaptively manage the Russian River Estuary with the objectives of enhancing summer rearing habitat for juvenile salmonids, particularly steelhead, and managing estuary water levels to minimize flood hazard. Rearing habitat for steelhead may be enhanced by reducing tidal influence on the Russian River Estuary from May 15 to October 15 (lagoon management period) to increase available freshwater habitat.  During the lagoon management period, Sonoma Water will adaptively manage a lagoon outlet channel with the intent of achieving an average daily water surface elevation of at least 7 feet (water levels may vary between 4 and 9 feet).

To create and maintain a summer lagoon, Sonoma Water would excavate an outlet channel, if the sandbar naturally closes, with a bed elevation low enough to allow outflow from the lagoon to pass over the barrier beach, but high enough to minimize the potential for closure caused by ocean waves. Physical establishment of the outlet channel during the lagoon management period would be similar in terms of equipment and duration as artificial breaching.

Breaching activities occur on the sandbar once it naturally closes.  The sandbar is accessed from the paved parking lot at Goat Rock State Beach.  A bulldozer or similar equipment is off-loaded in the parking lot and driven onto the beach via an existing access point.  A “pilot channel” in the sandbar is created at a sufficient depth to allow river flows to begin transporting sand to the ocean.  The sand is placed onto the beach adjacent to the pilot channel.  After the pilot channel is dug, the last upstream portion of the sandbar is removed, allowing river water to flow to the ocean.  The size of the pilot channel varies depending on the height of the sandbar to be breached, the tide level, and the water surface level in the Russian River Estuary.  A typical channel would be approximately 30 m long, 8 m wide, and 2 m deep (100 feet long, 25 feet wide, and 6 feet deep).  The amount of sand moved can range from less than 100 cubic yards to approximately 1,000 cubic yards.

Goat Rock State Park Beach is a haul-out spot for migratory species, including California sea lions, northern elephant seals and northern fur seals. Harbor seals are a resident species of marine mammal that have been observed at the Russian River estuary since 1974. These marine mammals (also known as pinnipeds) use the protected area of the Russian River outlet and sandy barrier beach for resting and refuge. Sonoma Water works closely with Stewards of the Coast and Redwoods to monitor pinnipeds monthly. Sonoma Water's Estuary Management activities are authorized under a Marine Mammal Protection Permit Incidental Harassment Authorization.

The purpose of the Pinniped Monitoring Plan is to detect the response of pinnipeds to estuary management activities at the Russian River estuary. This plan includes the conditions of the current Marine Mammal Protection Act Incidental Harassment Authorization, issued annually since 2010 by the National Marine Fisheries Service.

Annual reports of the pinniped monitoring are prepared as required by the National Marine Fisheries Service and are available at the link below:

Learn more about marine mammals in the Russian River Estuary

Several biological and physical studies have been conducted in the Russian River Estuary to assist in management decisions. These studies began in the early 1990s and many studies are ongoing. Listed below in chronological order are Estuary reports.

The Russian River Estuary Study, 1992-1993, was prepared for the Sonoma County Department of Public Works to evaluate the physical processes associated with sandbar closure, the changes to water quality and biological conditions following sandbar closure and breaching, the flooding impacts of sandbar closure, and develop a management plan for the Estuary.  The current management plan specifying breaching the sandbar when the water surface level in the Estuary is between 4.5 and 7 feet NGVD was a result of this plan.

Sonoma Water evaluated the impact of artificially breaching the sandbar at the mouth of the Russian River on water quality, pinnipeds, nekton, and fisheries from 1996 through 2000.  Monitoring included continuous sampling and observations before, during, and following sandbar breaching.

This monitoring evaluates the distribution and abundance of aquatic species in the Russian River Estuary during late spring through early fall beginning in 2003.  Over 50 fish species have been inventoried, including juvenile steelhead and Chinook salmon. Also, juvenile Dungeness crab rear in the Estuary. This monitoring effort has since been incorporated into the current sandbar breaching monitoring plan.

As a part of the State Water Resources Control Board Temporary Urgency Change Petitions, Sonoma Water has been monitoring the Russian River and the Estuary for Bacteria and Nutrient levels.