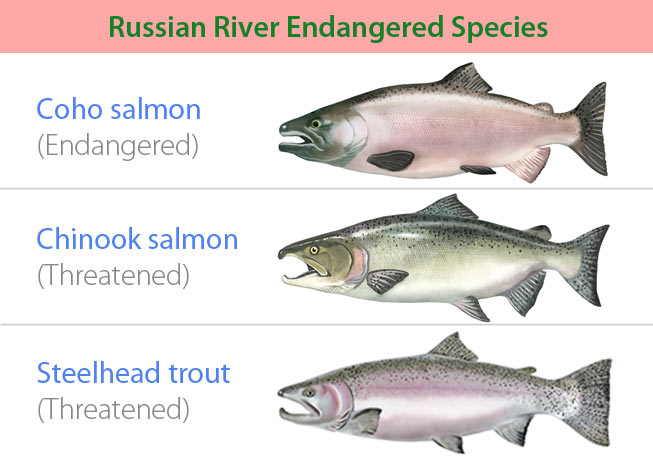 Sonoma Water recognizes the need to balance habitat protection with the obligations of providing an adequate water supply, and maintaining flood control and sanitation facilities; and is committed to assisting with the preparation of tools that facilitate the recovery planning process for federally threatened runs of coho and chinook salmon, and steelhead in the Russian River watershed as well as shaping policies that promote protection and restoration of other threatened and endangered species and their habitat.

Learn more about the Russian River Biological Opinion, a federally mandated effort to help save endangered fish and ensure our water supply.

The federal Endangered Species Act (ESA) is a complex and comprehensive law that was passed by Congress in 1973. The ESA is administered by the U.S. Fish and Wildlife Service and the National Marine Fisheries Service (NMFS).

The purpose of the ESA is to protect and recover plants and animals in danger of becoming extinct and to conserve their ecosystems. The ultimate goal of the ESA is recover species to the point that they no longer need protection under the ESA. Under the law, species may be listed as either endangered or threatened. Endangered means a species is in danger of extinction throughout all or a significant portion of its range. Threatened means a species is likely to become endangered within the foreseeable future.

The California Endangered Species Act (CESA), Fish & Game Code 2050, et seq., generally parallels the main provisions of the Federal Endangered Species Act and is administered by the California Department of Fish and Game (DFG). Under CESA the term "endangered species" is defined as a species of plant, fish, or wildlife, which is "in serious danger of becoming extinct throughout all, or a significant portion of its range" and is limited to species or subspecies native to California. CESA prohibits taking a listed species except as otherwise provided in State law. Unlike its Federal counterpart, CESA applies the take prohibitions to species petitioned for listing (state candidates). State agencies are required to consult with DFG to ensure that any action it undertakes is not likely to jeopardize the continued existence of any endangered or threatened species or result in destruction or adverse modification of essential habitat.