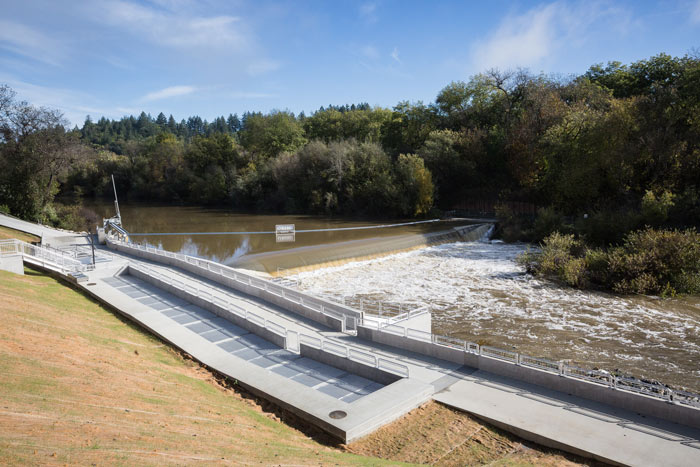 Sonoma Water’s Russian River Diversion Structure (RDS) and Inflatable Dam is the heart of a drinking water system that serves 600,000 people in Sonoma and Marin counties. Located downstream of Wohler Bridge near Forestville, the inflatable dam supports the six collector wells that pump water at a depth of about 100 feet after natural filtration through sand and gravel. This naturally filtered water is delivered through large pipes (called aqueducts) to eight cities and water districts in the North Bay, who then distribute the water to their customers.

Permanent fish ladders were installed on both sides of the inflatable dam when it was installed in the early 1990s. These ladders allow fish to safely bypass the dam.

Water that is diverted from the river and pumped into infiltration ponds is screened to prevent fish from getting trapped in the pump. The Russian River Biological Opinion, issued in 2008 by National Marine Fisheries Service, found that the fish screen had the potential to trap young, endangered coho salmon and threatened steelhead. In 2009, Sonoma Water began developing plans to replace the fish screen.

While the original fish ladders worked, they weren’t ideal for young fish migrating downstream. As a result, Sonoma Water operated the inflatable dam to create a “notch” that provided easier downstream passage for young salmonids during the late spring and early summer. This notch was created by adding air to the dam (which is inflated with water). Because the air expanded and contracted depending on temperature, the notch was challenging to maintain and often resulted in fluctuations in downstream flows.

In addition, a seismic study found that the RDS was vulnerable during earthquakes. If a major quake damaged RDS, the drinking water supply for 600,000 people could be interrupted for days or weeks. 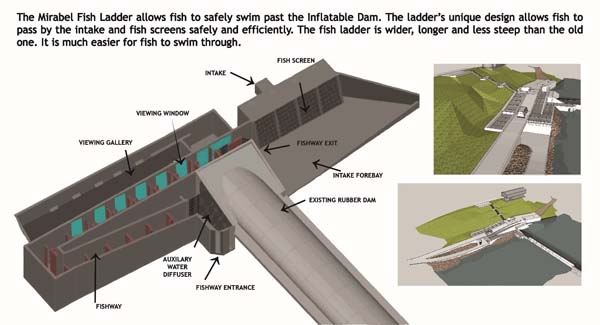 Seismic Upgrade: Beginning in January 2014, Sonoma Water constructed 326 stone columns in the river bank and embankment at the RDS, ranging from 30 feet to 90 feet deep. The columns were filled with rock, which densified the soil, reducing the risks of liquefaction and lateral spread during an earthquake.

Fish Screens: The original drum fish screens were replaced by six 12-foot tall by 6-foot wide panels, with a total area of 432 square feet.  The new fish screens incorporate an electric motor-driven mechanical brush system that periodically moves back and forth to clean the intake screen structure.

Fish Ladder:  Replacing the fish screen offered an opportunity to upgrade the fish ladder on the north side of the inflatable dam. The new fish ladder is a vertical slot fish ladder. Vertical slot fish ladders are commonly used for salmon and steelhead (among other fish species) throughout the world. The vertical slot fish ladder consists of a sloped, reinforced concrete rectangular channel separated by vertical baffles with 15-inch wide slots that extend down the entire depth of the baffle. The baffles are located at even increments to create a step-like arrangement of resting pools. (See illustration below for concept)

Viewing Gallery: The construction of a new, modern fish ladder offered the opportunity to develop a viewing gallery that would allow fisheries staff to more easily and safely count and identify fish. The viewing gallery also provides a window into the Russian River for the thousands of school children who annually visit the site as part of Sonoma Water’s award-winning Water Education Program. 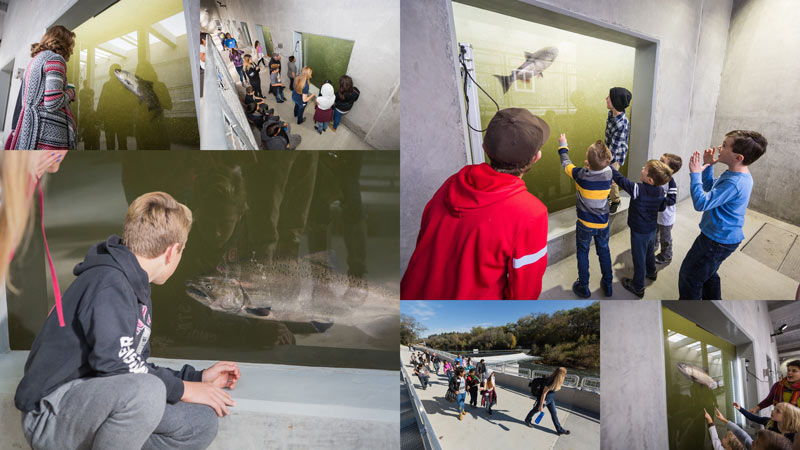